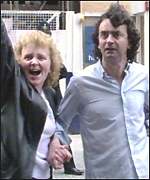 This case is dealt with at length in “The Woolwich and Guildford pub-bomb cases” by Bob Woffinden in his 1987 book Miscarriages of Justice (see Books section).
This is a long article in a number of chapters – covering as it does the arrest and trial of the four young people who went on to become known as the Guildford Four, the later trial of the Balcombe Street Four (the self-confessed perpetrators of the bombings), and the failure of the Guildford Four’s appeals.

An injustice that still reverberates

A decade after bombing convictions were quashed, the freed four and the legal system have not found all the answers

After the incredulity and then the euphoria of release from jail, the four people who had served 15 years for the Guildford pub bombings in 1974 had to find a life. Three are now married with families but the years of adjustment have been painful.

Ten years ago today the only thing that mattered was when Lord Lane, the lord chief justice, pronounced those magic words: the convictions of Gerry Conlon, Carole Richardson, Paul Hill and Paddy Armstrong were “unsafe and unsatisfactory”.

Conlon, a wild and wiry bundle of suppressed energy with delirious sisters on either arm, was the only one to face the crowds outside the front door of the Old Bailey. He punched the air in defiance and ran the wrong way down the street. Just like a confused animal, his lawyer thought. Conlon was then 35.

Richardson, 17 at the time of her arrest, was shocked and weak at the knees. She and her former boyfriend, Armstrong, disappeared separately out the back. She just wanted to hide. Hill, who was still serving life for a murder in Northern Ireland, was taken to Crumlin Road prison in Belfast and bailed two days later.

Theirs was the first of the momentous Irish miscarriage of justice cases which convulsed the criminal justice system and led to a rare royal commission. The crisis of confidence was encapsulated in one of Lord Lane’s concluding remarks: “The officers must have lied.”

The ramifications – on disclosure of evidence, the right to silence and to jury trials, the credibility of the police, the quality of forensic services and the question of racism – are still reverberating.

For the four people who had lost their youth, a personal trauma of equal intensity lay in store. As Gareth Peirce, Gerry Conlon’s solicitor, put it: “They come out with no money and no counselling. They have no references, it’s difficult to open a bank account, you can’t get a mortgage. They have no GP. You don’t belong.”

Little things – the pace of life and the gadgetry invented since 1974 – caused panic. They found the noise of traffic and crossing the road frightening. “You’re inadequate, you’ve no skills,” said Conlon.

But the most serious effects of 15 years in prison, most of them in category A, was psychological. Three years ago Adrian Grounds, a psychiatrist at the Institute of Criminology at Cambridge, examined Conlon and four of the Birmingham Six who were released in 1991. He found that they were suffering from irreversible, persistent and disabling post-traumatic stress syndrome. He compared their mental state with that of brain damaged accident victims or people who had suffered war crimes. “It often made them impossible to live with,” he said.

Some have fared worse than the others. After some manic trans-Atlantic campaigning for the Birmingham Six and other victims of injustice, Conlon descended into a cocaine haze, from which he is only now emerging. “I’ve been off it since last November,” he says. He is on the dole in a one bedroom flat on the south coast, and seeking the counselling that he realises he needed long ago. “For a while the cocaine took away the nightmares.”

Armstrong, 48, tried to settle into work but got caught up in the temptations of drink and gambling. He is now married and living in Dublin with a child. He’s unemployed and friends say “just coping”.

Hill, 44, who had his Belfast conviction quashed, famously married Courtney Kennedy, the daughter of Robert Kennedy who was assassinated in 1968. They live with their three-year-old child in Washington. But their marriage has had its strains to the extent that they sought help. Richardson, who has kept the lowest profile, has probably emerged the strongest, despite eight years on category A in grim Durham prison. She is happily married with an eight-year-old daughter, says her solicitor Alastair Logan.

All four received ex-gratia compensation payments after several years negotiating with the government’s assessor, Sir David Calcutt. Three have agreed a settlement of around £500,000 but Hill’s final figure has still to be arrived at. All the solicitors believe Calcutt has been mean with his awards. Oliver Kelly, Hill’s Belfast lawyer, describes him as “stingy, uncooperative and inaccessible”.

Mr Kelly says: “His assessments fall far short of what a reasonable person would expect. In these cases there should be no penny pinching.” Mrs Peirce says his “miserly” approach was the final insult. Mr Logan, for Richardson, believes that Calcutt should have awarded punitive damages.

The case and those that followed contributed to a change of culture in the system. Police and forensic science witnesses were no longer considered infallible. Confessions alone meant risky justice. There was a recognition that terrible mistakes had and could be made. Prosecutors had to be more open and judges more sensitive.

The high point in this sea change, it is widely held, was the 1992 court of appeal judgment in the Judith Ward M62 coach bombing case which delivered a searing indictment of police, crown lawyers and scientists for their failure to disclose relevant material. Twelve soldiers and members of their families, returning to Catterick camp in North Yorkshire, were killed in the explosion.

The Conservative government’s response was Lord Runciman’s royal commission which reported in 1993 – ironically the year of the bungled Stephen Lawrence murder investigation and the appointment of the reactionary home secretary Michael Howard. Its key proposal, a criminal cases review commission, was up and running three years later. Despite early criticism of its lack of independent investigative powers, its robust approach in sending many cases back to the court of appeal has been applauded.

Chris Mullin, now environment minister and the former chairman of the home affairs select committee which championed the Birmingham Six, said the commission was “a large step forward which had to be hard fought for. Most of the changes have been undoubtedly for the better.”

But some of the other laws that have flown from its recommendations have been seen as retrograde. Defence barristers and civil liberties groups unanimously criticised the erosion of the right to silence. A judge can now draw adverse inferences from a defendant’s refusal to answer police questions, although Mr Mullin argued that it was not unreasonable to expect a person to give an account of themselves if they were innocent. The critics also condemned disclosure rules that say the defence has to reveal its case while the prosecution retains the right to hand over only what it thinks is relevant.

Mrs Peirce says: “The royal commission was illiberal. Things have got worse now as any defence lawyer will tell you.”

John Wadham, the director of Liberty, added: “The Guildford Four were the first people detained under the prevention of terrorism act and it is disappointing that this legislation remains in place, despite the peace process and the government’s commitment in opposition not to renew it. In addition, the government’s proposal to remove the defendants’ right to elect jury trial in “either way” cases will add to the number of miscarriages of justice.”

Anne Owers, the director of Justice which campaigned on unpopular cases years before the Guildford appeal, was more sanguine. “On balance I think things have got better,” she said. “Juries treat police evidence in a very different way. But there has been a political dynamic with both main parties wanting to be tough on crime that has led to regressive legislation. Now the pendulum now seems to be swinging back because of the impending human rights act.”

Reservations about whether the balance on disclosure is right have spawned a plethora of internal reviews. At the last count these were being conducted by the home office, the Royal Academy of Forensic Scientists, the Criminal Bar Association, the crown prosecution service, the police and the Law Society.

The Guildford Four, who launched this legislative ferment, may be forgiven for still feeling let down and left behind. The state simply hoped they would go away. “The government still owes us an apology,” said Gerry Conlon. “We were four nonentities and we were ignored by the establishment. We have been disgustingly dealt with.”

Twenty-five years after four young people were wrongfully convicted of the Guildford pub bombings in 1974, Tony Blair has become the first person in authority to apologise for the miscarriage of justice.

In a letter to Courtney Kennedy Hill, the American wife of Paul Hill, one of the Guildford four, he said he was “very sorry” they were wrongly imprisoned.

Mr Hill, Gerry Conlon, Patrick Armstrong and Carole Richardson were given life sentences for bombing public houses in Guildford, Surrey. Each spent 15 years in prison before their convictions were overturned by the court of appeal in 1989.

Mr Hill and Mr Armstrong were also wrongfully convicted of a bomb attack in Woolwich, south-east London. A total of seven people died in both bombings.

Gerry Conlon told the Guardian last night that he was delighted with the news but he expressed anger at the belated timing of the apology and the fact that he and his family had never received one.

“We should have had an apology a long time ago, as well as proper compensation,” he said. “It’s been driving me mad that there has not been an apology so this thing can be put to bed. My mother in particular should have had one. I’m still going through a terrible time, getting dreadful flashbacks.

“My psychiatrist tells me he has never experienced a worst case of post-traumatic stress syndrome, worse even than those soldiers in the Falklands war.”

Mrs Hill is the daughter of the assassinated American attorney general, Robert Kennedy, and niece of the murdered president, John F Kennedy.

The programme says the prime minister wrote: “I believe that it is an indictment of our system of justice and a matter for the greatest regret when anyone suffers punishment as a result of a miscarriage of justice.

“There were miscarriages of justice in your husband’s case, and the cases of those convicted with him. I am very sorry indeed that this should have happened.”

It is understood that Mr Hill, 45, has received £200,000 as interim compensation for the time he spent in prison and is still awaiting a final settlement.

He told the programme: “No one knows the monetary value you can put on 15 years. I don’t think there is anybody alive who can come out of that experience and not be scarred.

“Those who would begrudge me my compensation – their minds are smaller than peas. To those who say, ‘Oh, he’s living well,’ you have no idea.”

He said he was numbed by his conviction. “I stood in the court. I was numb. I had no feelings whatsoever. I wasn’t sad; I was not depressed; I was cold and numb.

“And I think the most poignant thing was that the judge expressed regret that the death penalty was not an option.”

Challenging miscarriages of justice since 1993.